I have a pretty open policy. I'll friend most people back if they've commented on one of my posts, or if I comment on a lot of theirs (although chances are I'll probably friend you first if that's the case). If you haven't commented leave me a little comment here, just about why, and I'll friend you back :D.

gryphon2k
Fandom: The Fast and the Furious
Characters/Pairings: Brian/Dom, Team Toretto, Tanner, Bilkins, Carter Verone, Fenix
Rating/Category: M/Slash
Genre: AU, Action, Mutant!AU
Word Count: 15,791
Warnings: Violence
Summary: In order to solve a string of high profile robberies, and new drugs hitting the street, Brian's sent in as a new mechanic for Team Toretto. It's not only his driving ability, but his mutant powers that make him the best man for the job. Sparks fly when Brian and Dom meet, and Brian quickly realises he may be in too deep. But there's more to Dom's agreement to help the case then Brian and the FBI realise.

Link to story: On AO3
Link to art master post: Art by gryphon2k

So this morning (like 5ish, cos I go to work at ridiculous times sometimes) there was some banging noises outside my bathroom window. We don't own a dog but our neighbours do, so I just assumed it was him.

However, it did make me wonder (later as I was on my way to work). What if it wasn't? And would I have gone out and looked if I'd thought of that? (it was dark when I got up ... so I probably wouldn't have)

So, flist, if you hear a noise outside, do you go and see what it is? Or do you leave it?

So I've got this weird love of Bruce Willis. I just love the movies he's in, because I find him so entertaining (and hilarious). And A Good Day to Die Hard is another one of his movies that I love (and, LOL, that I could not stop laughing through)

( Collapse )
So yeah, if you're a Bruce fan, or a Die Hard fan, go and see this movie. You will thoroughly enjoy it.

PS - OMG!!!! Did you guys see the new Iron Man 3 trailer? I CAN NOT wait for this you guys. RDJ is another actor who I love watching!
Edited to say: that last line sound a bit creepy doesn't it? *looks shifty and runs away*

So I think I'm going to have to post two of these, because I can't decide if Clex or Merlin/Arthur are my OTP (is it possible to have two? Because I think I do. One that got me into fandom (Clex) and then the one I fell in love with after being on LJ for awhile).

That said I thought I should start with the pairing (and first OTP) that got me into fandom which was Clex.

Just got home from Comic Con and I'm soooo tired (and going again tomorrow, cos we didn't even get through half of it today, it went sooooo quick).

How was everyone's day? What did you guys get up to? I've written nothing today, but after watching a fanvid over on

Also I've signed up for the Multifandom Squee Challenge which asya_ana has posted and here's my pledge: 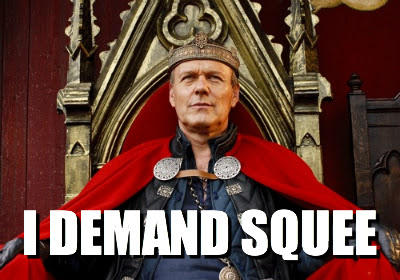 I pledge to complete the 10/20 Multi-fandom Squee Challenge by YOUR DEADLINE!

PS - Eoin Macken is coming to Supanova! Perth. *cough* yes, I really am a nerd
PPS - I love Callum Blue. Such a lovely and funny person

So Perth is holding it's Comic Con this weekend! I'm super excited, cos I'm nerdy that way. While talking to some of my friends about it, we were then wondering who was coming to Supanova (which is a mid year comic con that comes to Perth and we always go to) and I found out that both Karl Urban and Michael Rosenbaum are coming to Supanova, but only the Melbourne one! Which brings me to my whhhhhhyyyyyyyyy???????

Anywho, I'm getting closer and closer to finishing my merlin_redux fic. I just need to sit down and finish the thing already. The PL cursor is still blinking at me from when I opened it today. It has yet to start writing itself, disappointing I know.

And I've discovered a new fandom (yes, I'm a fandom whore, I've only just discovered this thanks to a post

jelazakazone posted about her own multi-fandom love ;)) 00Q. Which is based on Bond and Q from the new Bond movie Skyfall. Bond of course is played by (the awesome and I love him as Bond) Daniel Craig and Q by the (OMG so talented! and I love him as any character) Ben Winshaw. Pics from qbond over on tumblr

Want a taste? Read Slow Dancing In A Burning Room by feelslikefire or anything where Q is another Holmes brother.

Back to work tomorrow. Here's hoping the week is a good one.

tallihensia has added another story to her Not A Villian verse! I'm so excited. Clex was what made me first get into writing for fandom :)

Title: More Than Meets The Eye
Characters/Pairings: Clint/Phil (pre-slash), Natasha Romanoff
Fandom: Avengers
Rating: PG-13
Warnings: Violence, Alternate Beginnings, Pre-Slash
Author Note: Written for a prompt over on avenger kink - "Coulson's been given a lot of strange assignments since he started working for S.H.I.E.L.D. but recruiting a prostitute is definitely a new one.". Although I think this story isn't exactly what the prompter wanted.
Summary: Phil Coulson has an ability at seeing past the grime when other's can't. It's why the files of recruits deemed 'problem cases' pass his desk before being filed away for good. That said, he's never had to try and recruit a prostitute before.